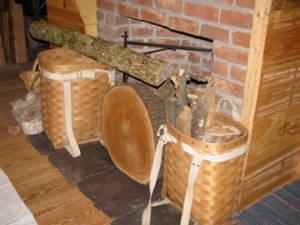 In September I went to the OEFFA Local Harvest Dinner and bid for and won a mushroom log workshop. At the time I really didn’t know what this would entail, but I love mushrooms and it sounded intriguing.

The workshop was hosted by Janelle Baron of Blue Owl Hollow Tree Farm in Newark Ohio. As well as running a tree farm Janelle also has a herb farm, grows mushrooms and is a wealth of knowledge on foraging and native plants. She primarily sells her produce at the Granville farmers market. Janelle has a SARE grant for an interesting project looking at the viability of growing mushrooms on the wood of the invasive tree species ailanthus altissima.

While I was arranging the workshop with Janelle I learned that there is no instant gratification in the world of mushroom growing. We were talking about at least a year long commitment to our mushrooms logs from innoculation (what we were doing at the workshop) to harvest and hopefully several years of harvest after that. With that kind of commitment I guess I’m not moving back to England any time soon. I was allowed to bring friends with me and four willing volunteers, perhaps because they had even less idea of what mushroom logs entailed than I did.

Janelle and her husband Peter welcomed us into the 19th century farmhouse which they are painstakingly restoring. Janelle had told me that there would be some light refreshments. If there was ever a case of understatement and modesty this was it. We were greeted by the most wonderful smells of baking and a smörgåsbord of home made delicacies.

Homemade breadsticks rolled and cut with a pasta machine 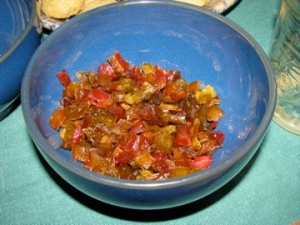 Most of the seasonings were herbs grown by Janelle. Nepitella is a Tuscan culinary herb (aka lesser calamint) that seems to be a cross between mint and oregano. It has an interesting savory flavor that went well with the cheese. Another dish not pictured were some succulent berry bars straight from the oven. My mouth is water just remembering all the food.

With all that wonderful food it was hard to focus on the task at hand, but Janelle was a wealth of information and demonstrated how to start a mushroom log imparting detailed information about the process at every stage. We were going to grow either blue or brown Oyster mushrooms. The blue are supposedly very vigorous but the brown oyster mushrooms are an Ohio variety so I chose them. 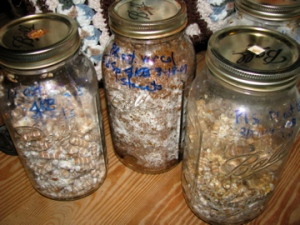 I am no mycologist so I am going to give an overview of what we did and for those who want to really understand mycelium I would recommend reading a book by the mushroom guru Paul Stamets, author of ‘How mushrooms can help save the world’ and ‘Growing gourmet and medicinal mushrooms’.

Basically you find a suitable log (moisture content is important and the log shouldn’t be allowed to dry out), you drill holes in it, you insert dowels into the holes and hammer them in. Then you paint over the top with (unused) melted cheese wax and store the log in a shady place off the ground to prevent contamination. The wax keeps in moisture and also prevents contamination from other moulds or fungi. The key part is that the dowels have been innoculated with mycelium which is feeding off the wood and will then start eating through your log. The log provides a food source for the mycelium through its incubation stage, it will then fruit and voila you have mushrooms. You can tell I am not a scientist can’t you, Janelle’s explanation was a lot more detailed and explanatory. Here is a useful introductory article about growing mushrooms.

While my patience is going to be tested waiting a year for the first mushrooms, the workshop itself was a pleasure as well as an education. The food was so good that I greedily went back to try ‘just one more’ with more frequency than I care to admit. Janelle and Peter were extremely patient answering question after question and their passion for living off the land was self evident. They were also amazingly generous sharing samples of their home canned venison, black walnuts, hickory nuts, ramp pesto and all sorts of other unusual treats.

A month on, and two of the logs are sitting in the shade by my garden fence. Now I have a reason to smile when it rains – its good moisture for the mushroom logs.