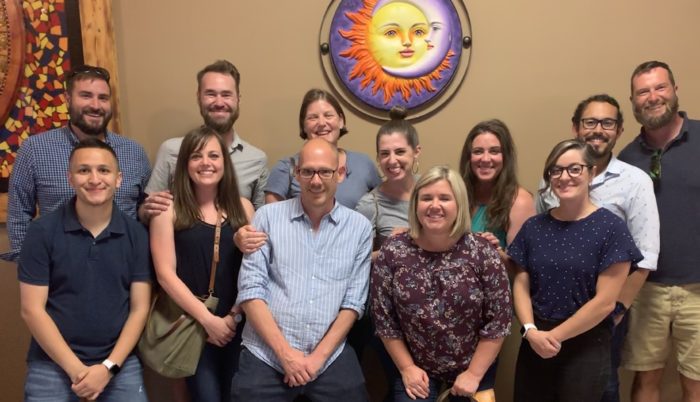 Bethia Woolf and Andy Dehus began Columbus Food Adventures, Columbus Ohio’s food tour company, with the belief that the quality and diversity of the Central Ohio food scene is a story worth sharing.  They have devoted untold hours through their many food websites to exploring and evaluating Columbus restaurants, from well-known gourmet eateries such as The Refectory or Pistacia Vera, to the city’s many lesser known hidden culinary treasures including its many taco trucks and mom & pop immigrant eateries.

The efforts that went into the websites have now been redirected into Columbus Food Adventures and into regular writing appearances in Columbus Monthly magazine. The websites remain accessible as a record of a time of significant change in Central Ohio’s culinary development. Check out our Instagram to see what we’ve been eating recently.

A UK native, Bethia Woolf has been a prolific chronicler of the Columbus food scene since 2007. In addition to her web work, she sits on the board of Dine Originals Columbus and writes for Columbus Monthly. She was a long time board member of Slow Food Columbus. Her in-depth knowledge of food and the Columbus food scene has been recognized in numerous local, regional, and national media appearances. Prior to founding Columbus Food Adventures in 2010, she variously served as an NCAA Division 1 coach, educator, and Himalayan expedition leader. While being qualified to treat altitude sickness and hypothermia probably isn’t a requirement in a midwest tour guide operator, isn’t it nice to know it’s there if you need it?

An Ohio native with, until recently, a near complete inability to stay in Ohio, Andy is Bethia’s equal in his desire for novelty in food and life. His background in design and marketing occasionally becomes useful in the course of running the business, as does his ability to convince Bethia that there is absolutely no risk of any of our guests coming down with altitude sickness.