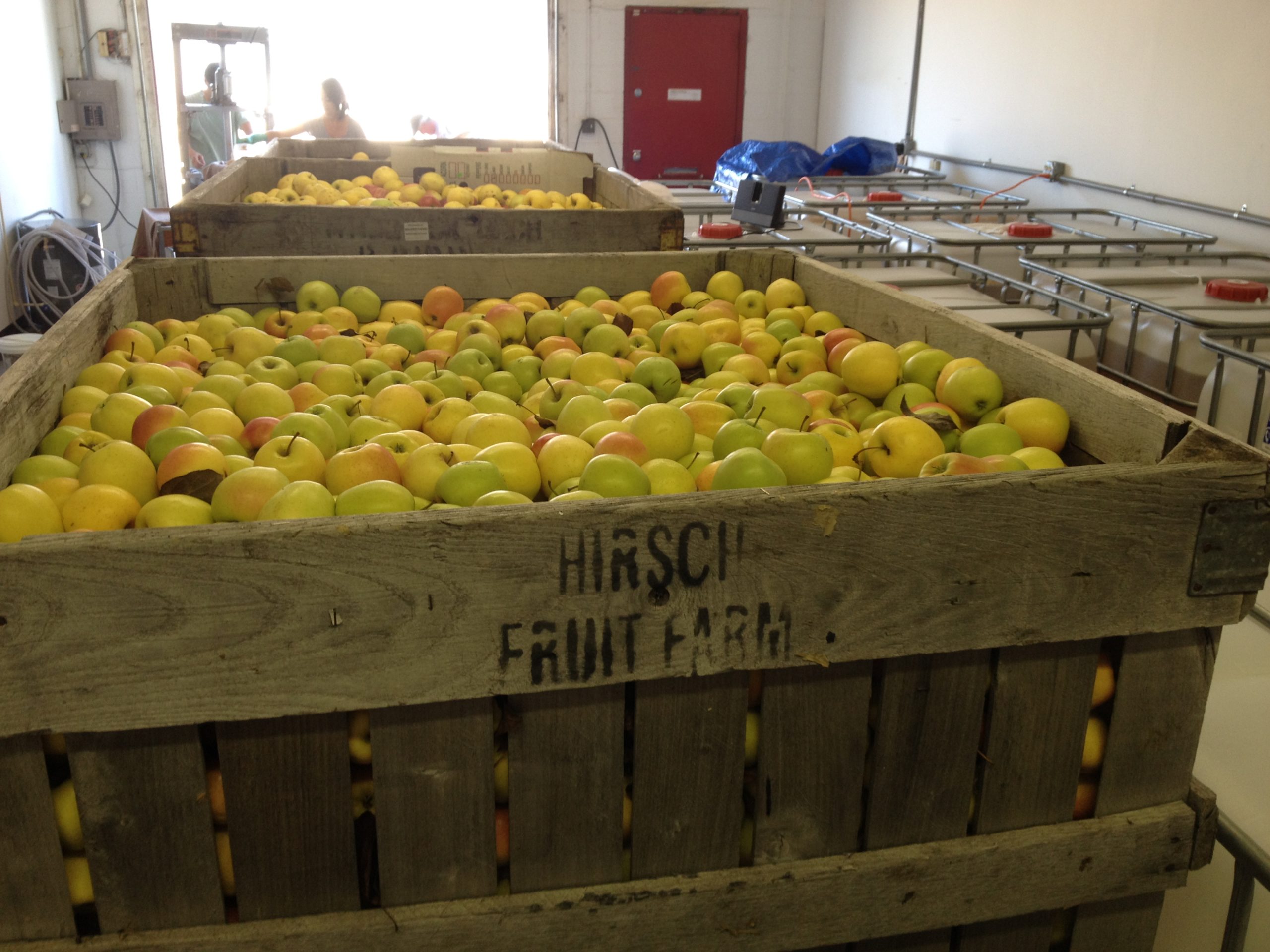 One of the best things about Columbus Brew Adventures is the diversity of people I get to work with and learn from. Several months ago I met Peter Moon, one of the owners of Mad Moon Cider at a tasting. After trying his products and hearing a bit of his story, I knew I had to get some tour groups into his space. I tested out the concept with private groups over the winter and each trip there was a crowd favorite. At each tour, I picked up a bit more of his story while meeting his wife and cider making partner Sally. I really became hooked on the craft of craft cider.

When Peter mentioned that they sometimes need volunteers to help with cider production I promptly volunteered. Then the stars and the Moons aligned and I had my opportunity to report for duty. Our team was small – the two Moons, myself and a fella I think may one day become a folk legend, Vic.

Anyway, step one of cider production is the sort apples. In our case, we had some multiple 800 lb crates of apples that had been stored over the winter. While these apples make great cider, they also require significantly more sorting than other batches. If you have heard the phrase “one bad apple spoils the bunch”, it is true and we had to search for them among 1000’s of apples in each crate.

As the apples get sorted into milk crates and buckets, the apples go down a chute of a device that looks a lot like a chipper to get mashed into apple pulp.

The pulp gets wheeled over to get crafted into sheets of “cheese”. The job of the cheese maker is to take scoops of pulp, and using a plastic mold and cheesecloth, create squares of apple pulp to stack on other squares to slide down to a press to squash (with 1000’s of pounds of pressure) to create juice.

Once the press gets going, the juice really starts to flow (down a long open trough) to a bin. Once the bin gets to a certain height, a pump gets switched on to transfer the juice to a holding tank (during my tenure I think we made about 300 gallons over four hours). After the pressing, the square molds are unfolded to start the “cheese” making process again. After the pulp is mashed, the residual looks like a very dry energy bar made by an eighties era hippy.

All in all, I was a great afternoon. You can see my work shirt below….taken near the beginning of my labors.

For my efforts I was rewarded with good company, a nice lunch and plenty of cider to take home.

Others things I could do in the future include bottling and capping, using the equipment you see below. The capper is pretty amazing, it was made out of a broken drill press Peter picked up for $50 (worth more than that by weight alone at a scrap yard) and mounted with a special capping mold he found on the internet. The MacGuyvered tool works like a charm. In fact much of what is in the cider house is customer made, crafted, reverse engineered and conjured up which is the nature of any small start up business. Mad Moon has a lot a stories to share and these are just a few of them. (FYI: the next Columbus Brew Adventures Tour to Mad Moon is August 30th).