Veritas – as in ‘truth’ – is a cheeky name for a restaurant whose dishes are so cleverly designed to deceive.

For example, consider our order of their shrimp cocktail. In lieu of the expected, what arrives at the table looks like a single large raviolo, and it isn’t that either. What it is, however, is the absolute essence of shrimp cocktail flavors, concentrated impressively, in a form that bears absolutely no physical or textural relationship to its namesake. 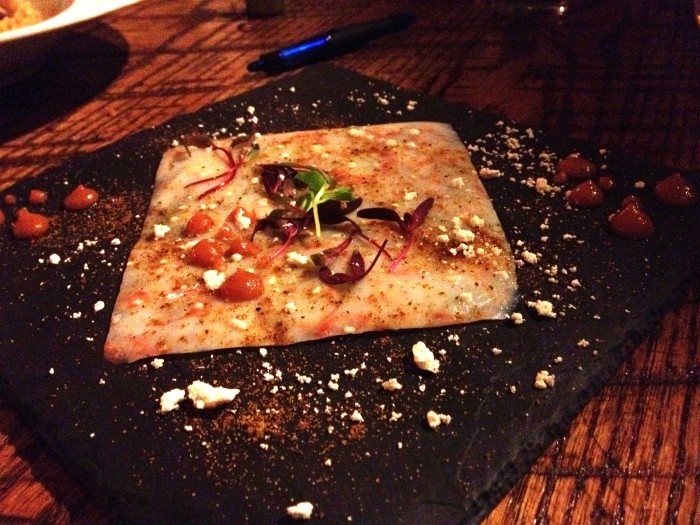 And it’s damned good; we ordered another. Chef, you can lie to us anytime.

Our table of 4, having just driven the 40 minutes required to get to Veritas from downtown, was doubly relieved; not only was it abundantly clear that the commute was worth it, but we were relieved because this particular style of culinary trickery, often referred to as molecular gastronomy, can risk sacrificing the pleasures of flavor in its quest to delight with sensory misdirection.

There were no concerns on that count. And, while many of the dishes aren’t quite as radically unmoored from their origins as the shrimp cocktail is, almost all have at least some element of surprise to them.

It’s small plates only at Veritas, and we giddily worked our way through the whole menu. Here’s a few highlights:

The above was called ‘Corn + Textures’ on the menu, and it amounts to a wide ranging study of the different forms corn can take. There’s corn mousse, corn brulee, corn smut powder, popcorn, and fried corn silk.  All were enjoyed, and the real revelation was how much the corn silk tastes like a russet potato skin. 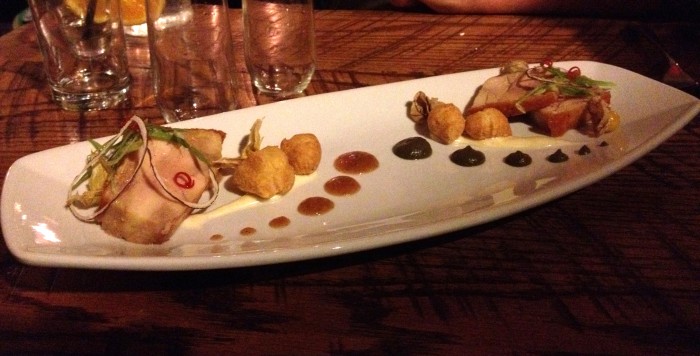 Next, the chicken quesadilla deconstructed. There are so many things to like about this dish, but the real eye opener was the chicken itself. Simply put, it was the most flavorful piece of poultry I’ve ever had. Queso fundido, masa puffs, and salsa round out this exceptional composition.

The scallops, foie, and caviar was quite possibly the most frustrating dish I’ll ever love. The foie gras mousse melted over the slate serving plank, the scallops were somewhat overcooked, and the spherized essence of bacon seemed an unnecessary embellishment. And then I tried a bite of the scallop, caviar, blackberry sauce, and foie together. The flavor combination sang like a diva under a dictator, and I’d order it again in a heartbeat.

If you’ve noticed how bad the above photos are (due to dim lighting and mediocre camera equipment), you can imagine how much worse the rest of them were. So not shown, but still every bit as notable as the aforementioned, were the bacon risotto with soft boiled egg, corned beef with yukon hash and fried egg, and the leek, baby root vegetable, and pignoli.

In total, it was just about as pleasurable a dining experience as is possible to have while dining in central Ohio, and perhaps felt even more so since we entered with modest expectations and left blown away.

A few things to know: plate prices run from $6 to $16, probably averaging around $11. It may take 3 to 5 plates to feel full, so it isn’t inexpensive. It is, I’d argue, a good value, particularly for the culinary thrill seeker – there’s simply nothing else like this in central Ohio, nor, as far as I’m aware, anywhere else in the state.

The menu changes frequently, as does the inventive cocktail list – in some cases for the purpose of pairing with new menu items. The beer selection should keep most brew geeks content, and the wine list is serviceable and poised to grow significantly.