There’s still time to buy a ticket for the Taste of Dine Originals this week (Thursday, May 12 from 6 to 9 pm), at the Audubon Center on the Whittier Peninsula. As always, this is one of the biggest food events of the year and is a fantastic fundraiser for the Buckeye Ranch. This year, Taste of Dine Originals will feature dishes from 50 Dine Originals member restaurants, 30 vineyards, 2 craft breweries and a couple of micro-distilleries. It’s a great way to get to know a lot of the different chefs and restaurants doing great things in the city and to help raise money for a good cause. The menu (posted here) looks absolutely fantastic… hope to see you there!

Another wonderful benefit coming up this month is the North Market Apron Gala. For more than 135 years the North Market has been a valuable part of the fabric of our community and a treasured historical landmark. Although the North Market earns the majority of its annual budget through rent and parking fees, donations are critical to the funding mix; attending the Apron Gala is an easy and enjoyable way to support it.  The 15th annual event will be held on Saturday, May 21 from 7 – 10 p.m.  The event is fabulously fun and showcases the best of the market – guests enjoy appetizers, main tastes and desserts from all of the North Market merchants, as well as entertainment, a cash bar, silent auction and raffle prizes. More details and tickets. 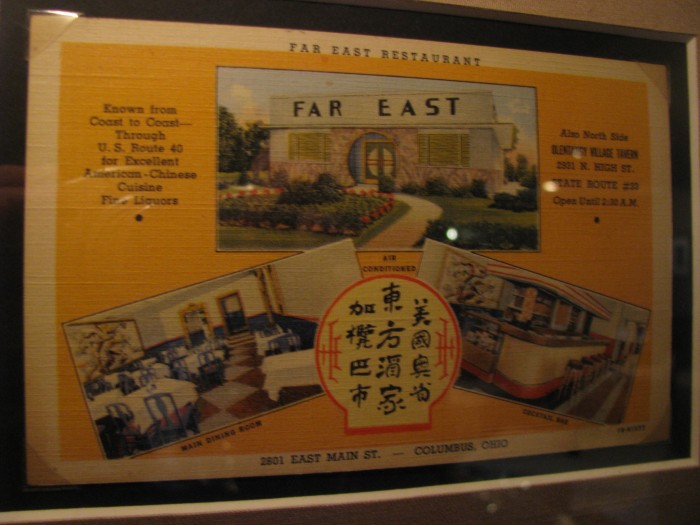 May 24th is our first historic restaurant tour, a collaboration with the Columbus Historical Society. We will be visiting historic restaurants on the east side of Columbus and tasting our way through time with signature dishes from each restaurant. Our stops are The TAT, Wing’s, The Top Steakhouse and finally for dessert, Johnson’s Real Ice Cream. Don’t miss this special event. (Tickets available here)

Saturday May 28th is the annual salmon roast at Hills Market. They’ll be grilling up over 1000lbs of salmon and there will be plenty of other food, ice cream and music. Hills also have a wealth of other events this month including happy hours, cheese tastings and family friendly spaghetti dinners.

Also on Memorial Day weekend is the annual Asian festival held at Franklin Park. There’s always a lot of great food to sample as well as live performances all day.

If you are planning further ahead, you can purchase tickets for Jeni’s book launch party at the Wexner Center on June 11th. While we’re talking about ice cream, Jeni’s has a bunch of summer flavors coming out this Friday, including some old favorites like lemon blueberry and backyard mint and an exciting new flavor – Rockmill and apricot made with Belgian style beer from Lancaster’s Rockmill brewery. Jeni’s new German Village scoop shop is now open and offering about a dozen of the most popular flavors. 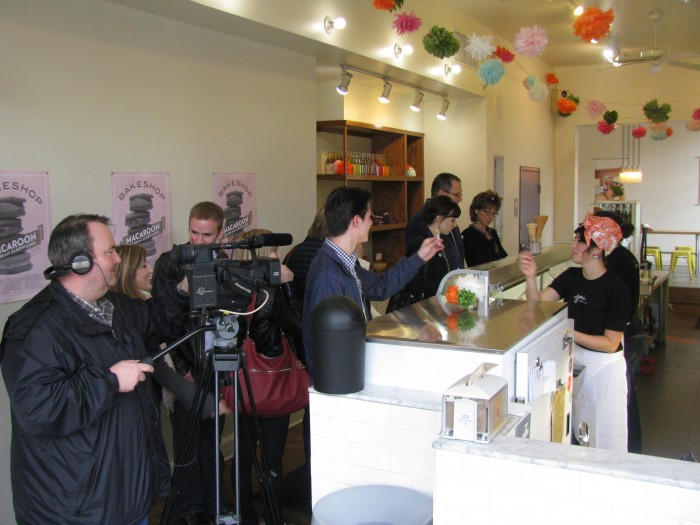 Columbus Food Adventures will be featured on the ONN show ‘Discover Ohio‘ this Sunday as part of a show featuring Ohio food. Their crew came on two of our tours back in April, and we’re excited to see the segment. In the picture above you can see them filming our Short North tour at Jeni’s. We have had some great coverage recently including an article on our taco truck tour in the May Columbus Monthly.

Columbus has a new culinary magazine Columbus Crave, officially out today. It’s a quarterly magazine published by the Dispatch group and copies are available at over 500 locations in Central Ohio. I’m honored to have an article about Los Guachos Taqueria in the first issue accompanied by great pictures from Jodi Miller. 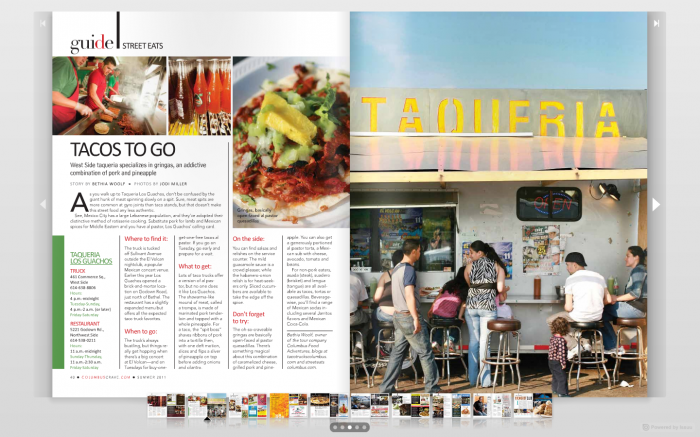 Zen Cha tea salon have opened a second location in Bexley (2369 E. Main St). They have a fantastic range of teas to taste your way around the world, although it’s hard to resist the taro bubble tea. If coffee is more your thing, Cafe Brioso have a swanky new expresso machine at their downtown coffee shop. If you haven’t tried their artisan roasted coffee it’s worth making a detour to Gay Street, and while you’re there you can pop across the street to Sugardaddy’s to try one of their new brownie sundaes – your choice of brownie with Johnson’s vanilla ice cream and caramel or fudge sauce. Sugardaddy’s just celebrated their first anniversary downtown and are looking forward to opening a new store at Easton this summer.

More and more restaurant spring and summer menus are appearing including G Michael’s and the Worthington Inn. This week we are eagerly anticipating the new menu at Knead and a new cocktail menu at M. Cris Dehlavi and her team have been working on homemade tonic water. We’re intrigued.

Recent posts on alt eats Columbus include our new craving plantain empanadas at El Salvadoreno, Erawan Thai – some competition for Bangkok, La Favorita (formerly La Michoacana on Sawmill) and Japanese fast food from Tensuke Market. We are also getting into festival and street food season so expect to see more posts popping up on streets eats Columbus soon.