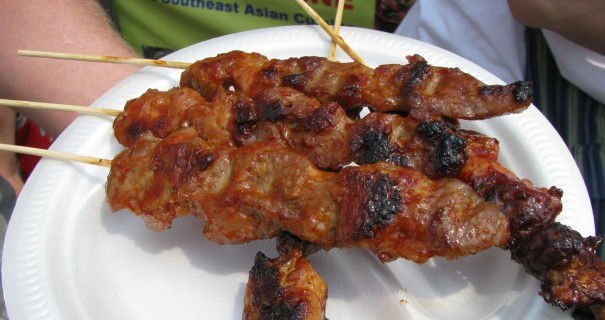 Memorial Day weekend is a busy time for food lovers in Columbus, with 3 great events vying for our attention:

You can feed all of your senses at Columbus’ 17th annual Asian Festival at Franklin Park. The festival, on Saturday and Sunday, features all sorts of performances, activities, exhibits and an interesting selection of Asian street food. Another great food event is the North Market’s Grill Masters Festival, also on Saturday and Sunday. There will be cooking demonstrations, a chef’s grill off and an amateur BBQ sauce competition. Pick up some recipe ideas and then shop at the North Market and the Farmer’s market for your ingredients. Saturday is also the Hills Market’s annual salmon roast. They’ll be grilling up 1000lbs of salmon, no reservations required. 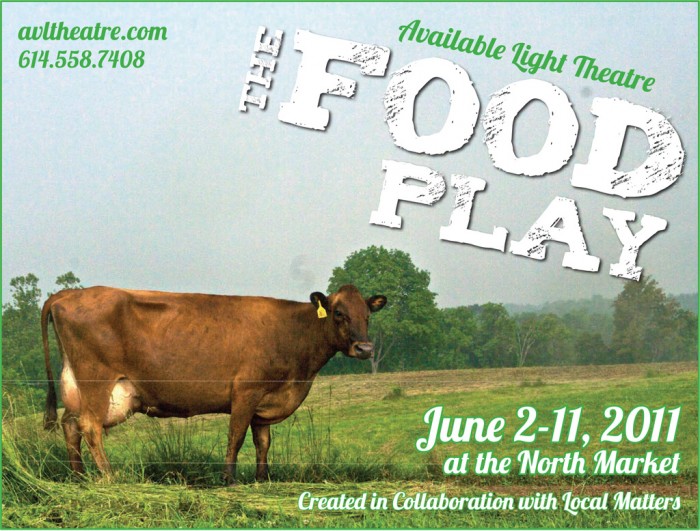 But wait, there’s more coming in June! First off, we are very excited to be associated with Available Light Theatre‘s production The Food Play which runs from June 2nd-11th in the North Market’s Dispatch Kitchen. The Food Play is:

The show is about food issues and our local food system and Available Light Theatre will raise (and attempt to answer) questions like ‘what is good food?’ and ‘what does it mean to eat right?’ The cast has done an amazing amount of research including a field trip to Joel Salatin’s Polyface Farms. The Food Play also includes delicious food from Local Matters and Jeni’s Ice Creams and it will be interactive (you won’t have to get up on stage but you will have an opportunity to chat with other members of the audience and cast). Each show has an interview component and I will be participating in the first one on June 2nd and having heard a lot about it, I can’t wait to see it on opening night.  If you want to learn more here’s a video and some FAQ. You can buy tickets here.

Other food events in June include Jeni’s book launch party at the Wexner Center on June 11th. Any proceeds from ticket sales will be donated to the Wexner Center. For the price of entry, you’ll get an ice cream cone and a complimentary Middle West Spirits cocktail, hear great music, have some great food, and be one of the first to get your hands on Jeni’s debut cookbook. (The book hits store shelves June 15.) Jeni’s has some great new summer flavors including Rockmill golden ale and apricot and lime cardamon with rhubarb swirl. Some summer favorites are also returning, including backyard mint and strawberry buttermilk. Another new flavor ‘the milkiest chocolate in the world’ slipped straight to the signature flavor list. Make sure you don’t miss it, they don’t make that claim lightly. 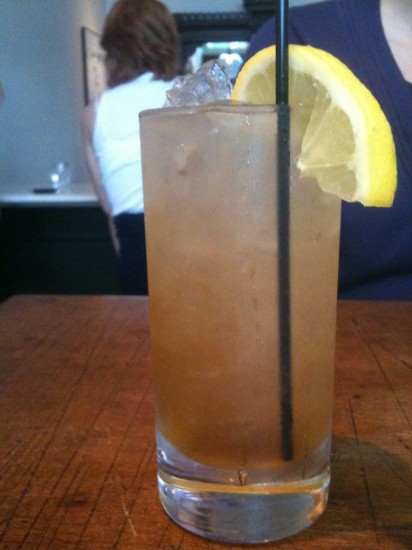 On June 8th at 6pm the Refectory is hosting a gin tasting with five different gins and light hors d’oeuvres for $19 per person. If you’re a gin lover or cocktail fan you might want to check out the new brunch service at Mouton for classic cocktails paired with Pistacia Vera croissants. Brunch is currently on Sundays only but we’ve heard they plan to expand to Saturday as well.

Other restaurant news: The Burgundy Room is closed for renovation. We hope they will open again soon. The Rossi has a new chef and we’ve been very impressed by what we’ve seen so far. Last week’s special of pork and beans won my heart on an unseasonably cold and wet evening. Sage American Bistro is now open for lunch (Tuesday-Friday, 11am-2pm), the menu features sandwiches, salads and a couple of entrees including their highly-praised veal meatball. There’s a also a new menu at the MoJoe Lounges in the Short North and German Village. Chef William Fuggitt is now presiding over the kitchen and new items include the roasted red pepper risotto fritters pictured below.

Other food news: Hills Market have introduced an online store called Hills on the go. This means you can now get Ohio made produce and products, wine, beer and Jeni’s ice cream delivered to your door. Order before 4pm and you can have your groceries delivered on the same day.

June 21st is the Central Ohio Restaurant Association’s Foodfight 2011 which encourages people to ‘eat out to fight hunger’. Eat or drink at any of the participating restaurants for breakfast, lunch or dinner on Tuesday, June 21, 2011 and five percent of the day’s proceeds will be used to support Mid-Ohio Foodbank’s Operation Feed campaign. So far there are about 20 restaurants participating.

Columbus Commons opens this week (the grand opening is Thursday) and through the summer it will feature a farmers market and mobile food vendors on Wednesdays for its ‘lunch on the lawn’. The farmers market season is definitely in full swing and the Easton Farmers Market makes its debut on Thursday June 2nd. It will be open weekly through the summer from 3-7pm with approximately 50 vendors and featuring a veggie valet for you to leave your produce in a safe place while you shop the rest of the mall. You can follow them on twitter@eastonfarmermkt.

Taco truck season is also underway with more new trucks popping up. The lastest (and most exciting) is El Fogoncito on Morse Road. It’s a venture from the same family that runs Los Guachos and offers a similar menu. It’s the biggest and shiniest truck in town – a perfect stop after the Easton Farmers Market.