We’ve come to feel a strong sense of admiration for the large (as in second largest concentration in the US) Somali community in Columbus. Through our experiences with the always-smiling owners and patrons of Somali restaurants, as well as our discussions with documentary filmmaker Abdi Roble and friends, we’ve been amazed by the energy, good cheer, and entrepreneurial spirit found within.

Unfortunately, the extended families of many of these people are hurting. Due to the famine in the Horn of Africa, a staggering number of Somalis and people in bordering countries are unable to access even the most basic of food staples. Starvation is rampant.

During one of our Alt.Eats tours, we made an offhand comment to Solay Bistro’s owner, Nadira, about the desire to help. Vague plans about a benefit dinner were discussed. Later that evening, Nadira called us and excitedly told us she had discussed our idea with others in the community and received nothing but positive feedback. In fact, she had received commitments to purchase 40 tickets for the dinner. So, it’s ON! 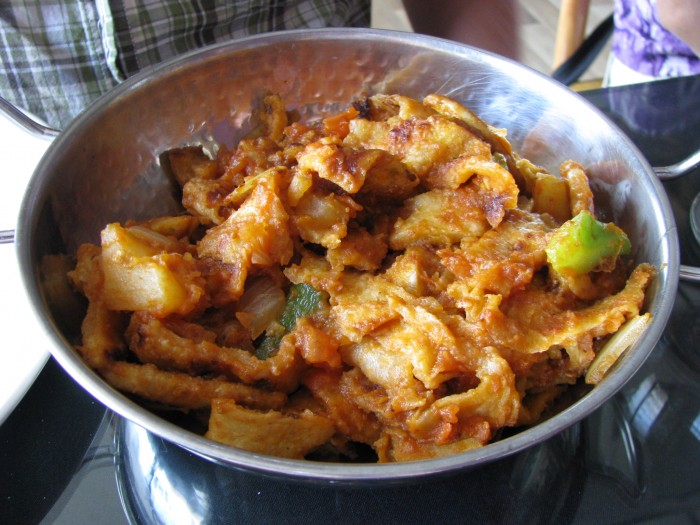 Here are the particulars: We’re helping Nadira to now promote two fundraiser dinners, one on Sept. 7th, and the other on Sept. 14th. They’ll both be held at Solay Bistro, with a maximum of 80 people on each night. They’ll be buffet dinners featuring some of the best of Somali cuisine and some menu items new to Solay. Nadira will sell half of the tickets to the Somali community for each night, and we’ll be selling the other half to the city at large.

The menu will (almost certainly) include the following:

Tickets are $35/person, with proceeds going to the American Refugee Committee (one of the most highly regarded non-profits working in the Horn of Africa region). If you’d like to join us (and really, why wouldn’t you?) you can purchase tickets through Brown Paper Tickets. There will be plenty of options for vegetarians.

We look forward to seeing you there, and look forwards to sharing some of the best of Somali food in Columbus with you while supporting a great and urgent cause.

2 Comments to “Horn of Africa Benefit Dinner at Solay Bistro”