Josh Ozersky is a meat man. Not meat and potatoes, just meat. The kind of guy that ‘meat lovers’ pizzas were invented for. But pizza isn’t Josh’s thing. Burgers are. He’s the author of The Hamburger: a History  and he was in town for a burger demo at the Best of Fall home show.

I asked him if he ever got sick of burgers. The answer was a categorical ‘no’. As proof, he confessed that even though he knew that he was going to dinner at The Greenhouse Tavern the previous night for a meat-tastic feast, he still stopped at Steak ‘n Shake on the way there for a burger. All because he was in the Midwest, and Steak ‘n Shake is one of his favorites.
When I asked him what makes Steak ‘n Shake so good, he averred that ‘It exemplifies everything I believe about hamburgers, it’s inspirational. It’s a single cheese burger with a slice of onion. No mayo, no lettuce, not tomato, and the patty is under 2oz. It’s minimalist, it’s pure, it’s the hamburger equivalent of figs on a plate’.Apart from Steak and Shake, I asked him what he has been enthused about recently. He talked about his dinner at the Greenhouse Tavern, and in particular the whole pigs head which brought him ‘sheer animal pleasure’ and was beautifully made and presented with a striking lacquered skin. He was almost salivating as he described extracting jowl meat from the pigs head with the ease of picking up a spoonful of gazpacho. Also notable from his dinner at the Greenhouse Tavern was the chicken fried lamb with gravy. Ozersky was full of praise for Chef Jonathan Sawyer, who he said is doing so much right.

Another dish that has recently inspired him was an ash baked potato with caviar at the Michelin 3 star restaurant Le Bernadin, which he praised for being ‘elemental’.

I asked him what wider food trends he is seeing that excite him and he mentioned in-house prep (vinegars, condiments, pickles), the continued upsurge of the ‘lard core‘ movement (Southern food with a hard-core attitude) which he described as greasy rustic ingredients prepared in a refined and meticulous way, and the steady continued decline of what he dubbed ‘tweezer food’. Tweezer food is something Ozersky has much disdain for. He described it as luxury food for gastrocrats, but was quick to make a distinction between modernist aims (trying to make things better) and the effete and fastidious daintiness that he finds ungratifying and effeminate. To his mind there is no reason why you can’t have modernist burgers in big portions, and modernist food doesn’t need to be inextricably connected with tiny cubes presented by a ‘servile nuncio’.

He talked about chefs who have an intrinsic feel for rustic food akin to having an ear for music. He would like to see that sort of feeling expressed in the medium of American vernacular cooking and to give dishes like the hamburger a modernist approach without miniaturizing and emasculating them.

I asked him if he had any advice for the Columbus food scene. He said that it is important to identify the trends that are worth following and advance and improve on them. Some trends like lard core, ‘head to tail’ and foraging he sees as worthwhile. It doesn’t matter who starts a trend, what’s important is who is doing it really well. Emulators are often doing the best things. “From the food I’ve seen in Columbus (albeit a limited sample) it lacks nothing in creativity and dedication. Chefs should worry less about making new dishes but should focus on making the best food their their walk-ins and imagination allow. Originality is overrated.” He went on to praise Alana who he said was a truly original cook with her own voice, vision and style.

Josh’s latest book (coming out in May from the University of Texas Press) is a biography of Colonel Sanders. Here’s an article he wrote on the same topic. According to USA Today, 61% of respondents didn’t know who the guy with the beard in the KFC logo was or that he was a real person. The book tells the story of the man, the food and the times he lived in. Colonel Sanders lead a rich, varied and complex life and as a corporate icon he has lived on into the 21st century.

Josh’s request for breakfast was coffee and meat. We had breakfast at Latitude 41 downtown where we sampled one of their new breakfast menu items. The breakfast flatbread is a winner. Molinari sausage from San Francisco, 2 soft eggs, Yukon hash and white cheddar. If you are a sucker for salty breakfast foods and runny yolks, you’ll certainly be happy with this creation. Ozersky was at his happiest nibbling on bacon from the buffet, talking Juicy Lucys with chef Dave McLennan and examining the milk rolls from Eleni Christina that Chef Dave uses for his burgers.

‘Nice bun but you’d need a 7oz patty for this one’. 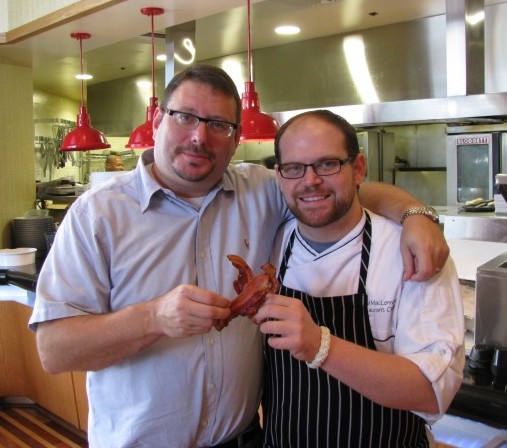 2 Comments to “Breakfast with Josh Ozersky”