Spanakopita is a Greek phyllo dough pastry traditionally filled with spinach and feta cheese. It can either be made as a large pie or, as I prefer, triangles. I started with a recipe from the Food Network, but over the course of several batches refined both my technique and the recipe.

I bought the feta from the Farmers Market, the spinach, scallions and eggs were from the Greener Grocer. The Swiss chard was part of my Wayward Seed Farm CSA which started this week. I used the chard because I didn’t have enough spinach, but actually thought that it gave the flavor an added dimension, so next time I would use it deliberately.

Wash and dry the greens. Saute them in a large pan, with 1/2 tablespoon olive oil. I used my wok as there is plenty of space to keep moving them around. It is best to add the toughest parts first. I started with the chard stems, then added the chard leaves and finally the baby spinach. You should cook them until completely wilted, and then transfer them to a strainer. Squeeze out as much moisture as you can. In the same pan, with 1/2 tablespoon of olive oil,  saute the scallions until soft.

Put the greens, scallions and parsley in a food processor with salt, pepper, a squeeze lemon juice and a little freshly ground nutmeg. Pulse until the mixture is finely chopped. Put in in the fridge to cool. While the are chilling you can crumble the feta, and melt the butter with 1/2 cup of olive oil. 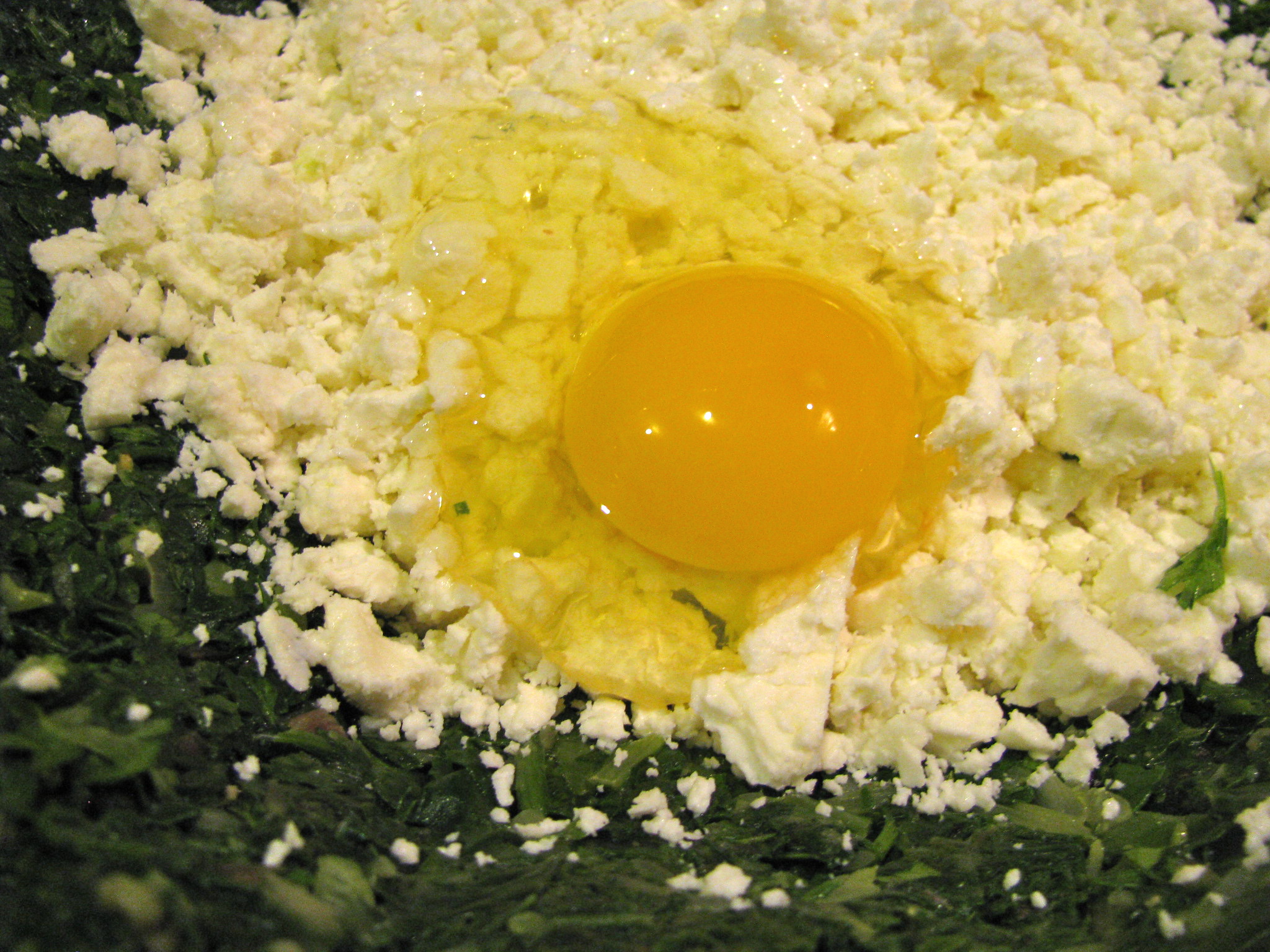 Add the crumbled feta and the egg to the green mixture, stir until combined  and your filling is complete. I changed the ratio of spinach to cheese from the original recipe. I think 3:1 has a lot more flavor than 4:1. 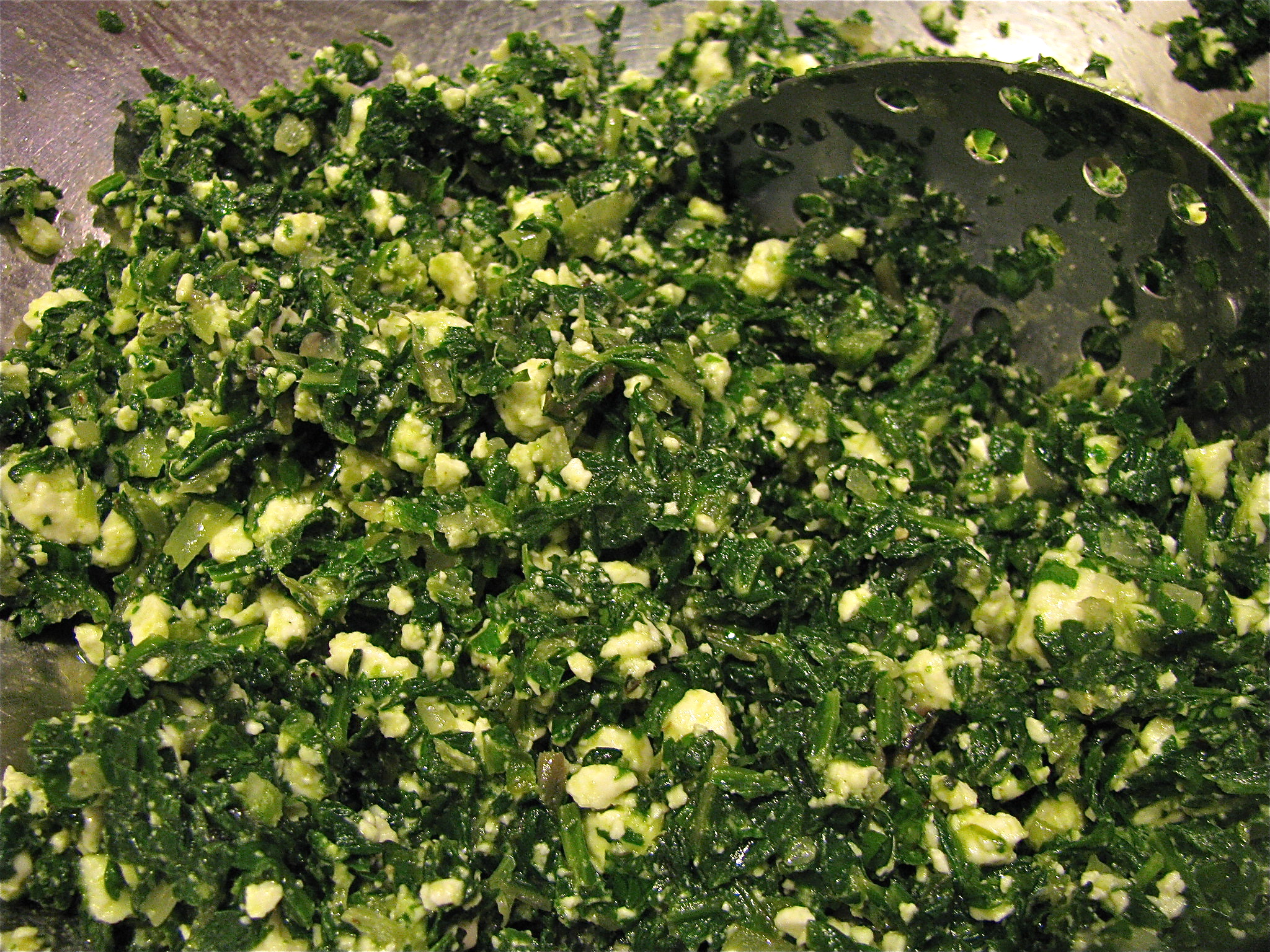 Take the phyllo out of the package and spread it out on your work surface. It is important to keep it from drying out, so any phyllo that you are not using should be kept covered by wax paper or saran wrap and a damp towel. Cut the dough in half lengthwise so that you have long strips. Brush the top strip with the butter and olive oil mixture (I love my silicon pastry brush) and then place some filling in the corner. Fold the corner over so that you have an off center triangle point at one end. Keep folding this triangle over until you get to the end of the strip. It’s like folding a flag. Brush the next sheet with the butter mixture and fold your triangle in a second layer of dough. I found that the second layer made a big difference to the appearance and durability.

Place on a baking sheet (I lined mine with a silicon mat or parchment), and brush the top with butter. Keep making triangles until you have run out of filling or dough. I made over 20 with half a packet of dough.

Bake them for approximately 25 minutes until they are golden brown. They are best eaten when still warm from the oven. Serve as an appetizer or snack. If you want to make them a little bit ahead of time, and then bake them just before your guests arrive make sure you keep them covered so that they don’t dry out and crack. You can also freeze the unbaked pastries.