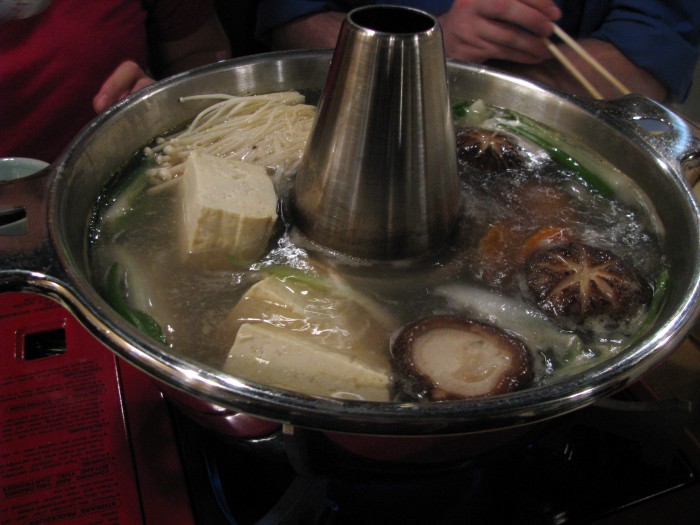 Shabu shabu is the Japanese name for a type of ‘hot pot’, an Asian dish cooked and eaten at the table. It’s a shared dish, not unlike fondue, in which you dip meat (traditionally beef) and vegetables into hot broth to cook them. Shabu shabu translates as ‘swish swish’, and describes the sound of your chopsticks swirling ingredients in the broth. As a large pan of steaming broth makes for a wonderful winter meal, it seemed the ideal time to explore the dish in-depth.

In the course of my shabu shabu quest I visited Chinese, Korean and Japanese restaurants. This is not too surprising as we find a lot of overlap in dishes between restaurants of different Asian cuisines (think of all of the different nationalities of restaurants that offer pad thai). Hot pot is said to have originated in Mongolia, spread into China and became popular in Japan and Korea in the twentieth century. Versions of hot pot can also be found in countries across SE Asia. The name shabu shabu is now often used outside of Japan to describe some styles of hot pot preparations. 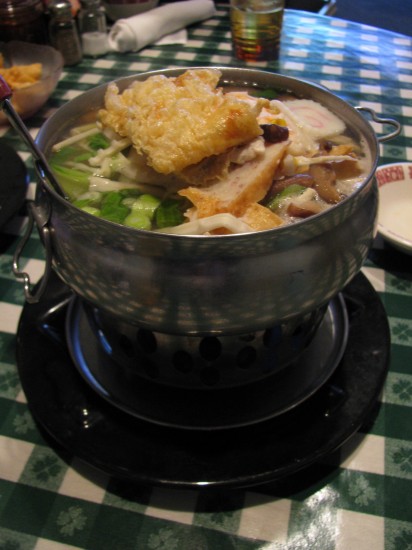 My first experience of shabu shabu in Columbus was at a Chinese restaurant called General Tso’s. We tried both versions of shabu shabu on the menu: seafood (with shrimp, chicken and scallops, pictured above) and the spicy beef (pictured below). The hot pot was accompanied by a plate of dried rice noodles and a raw egg to cook in the stew, but all of the meat and fish was already bubbling away in the pot. Both stews were packed with their respective proteins and vegetables and on top you can see sheets of bean curd that were to be re-hydrated in the stew. They were delicious and satisfying on a cold wintry day, but they weren’t what I was expecting – I suspect these weren’t really shabu shabu but another type of Chinese hot pot. 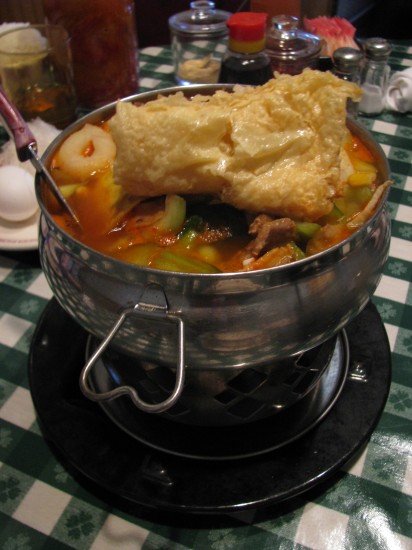 My second shabu shabu experience was at the new Korean BBQ restaurant San Su on Bethel Road. San Su has an extensive sushi offering so it is not too surprising to find Japanese dishes on the menu (although shabu shabu also seems to be popular in Korea). The Korean BBQ tables are easily converted for shabu shabu and the pan of broth is lowered onto the grill. Below you can see our simmering pan of vegetables and broth. 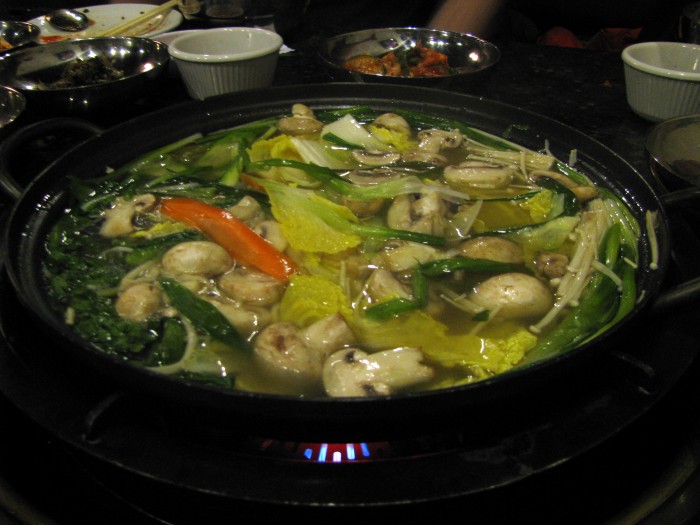 San Su’s shabu shabu was much closer to what I was expecting. A pan of mild broth (which seems more like the Japanese than Korean version of the dish), a plate of beef, vegetables (napa cabbage, chrysanthemum leaves, mushrooms, spinach, enoki mushrooms, scallions, zucchini, carrots), udon noodles and a dipping sauce. The benefit of being at a Korean restaurant was the addition of a raft of banchan dishes which added some variety to the meal. 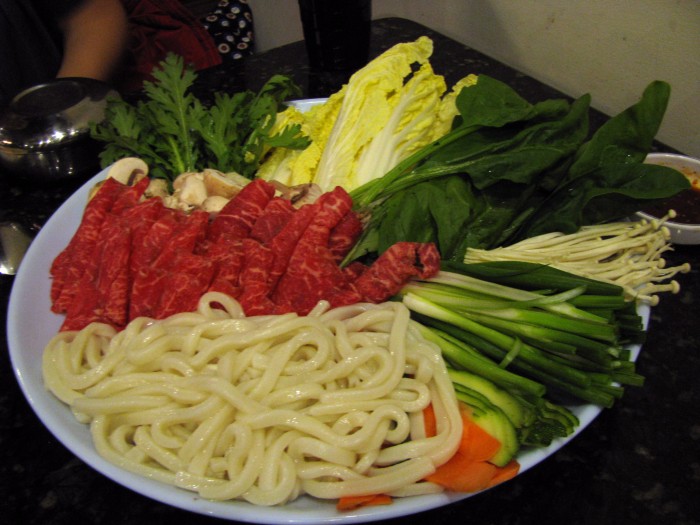 People seem to have different methods for eating shabu shabu. Some cook the beef in the broth first, skim off any scum and then cook the vegetables and noodles. We were advised to start cooking our vegetables first to add more flavor to the broth, then cook the beef and add the noodles right at the end. Each piece of meat only takes a few seconds to cook, just enough to say shabu shabu a couple of times. After you have eaten all of beef, you can cook the noodles and enjoy a bowl or two of vegetable noodle soup. 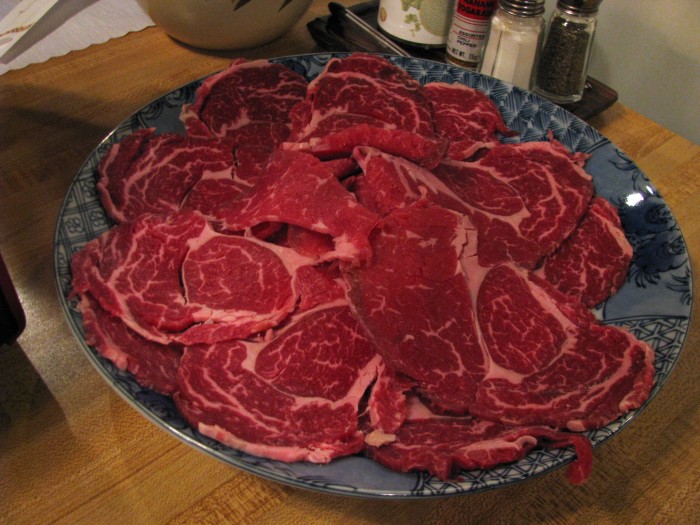 Finally we found a Japanese restaurant that was offering shabu shabu so that we could experience it Japanese style. Ba Sho is a small Japanese restaurant off Sawmill Road in Dublin with private tatami rooms and the largest selection of sake I’ve seen at a Japanese restaurant in Columbus. When we ordered a small camping stove was brought to our table. The pot full of kombu dashi (kelp broth) had a chimney and we waited while the water came to a boil. We were given one plate of beef (pictured above- thicker slices than the beef at San Su) and a separate plate of vegetables (scallions, napa cabbage, carrots, enoki mushrooms, shiitake mushrooms) with rice noodles and tofu (below). 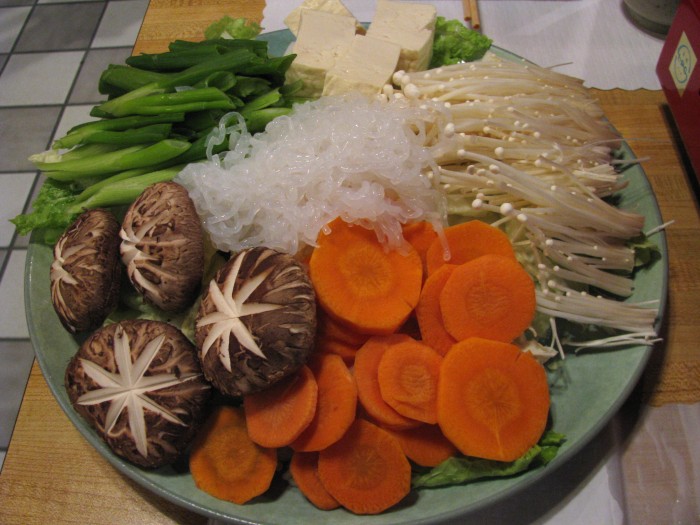 The two dipping sauces at Ba Sho were the traditional sauces for shabu shabu: goma (sesame) and ponzu. Goma is made with kombu dashi, sake, ground sesame, sugar and soy sauce and ponzu is made from soy sauce with bitter orange juice, sake and kombu dashi. You cook your beef or vegetables and then dip them in one of the sauces. 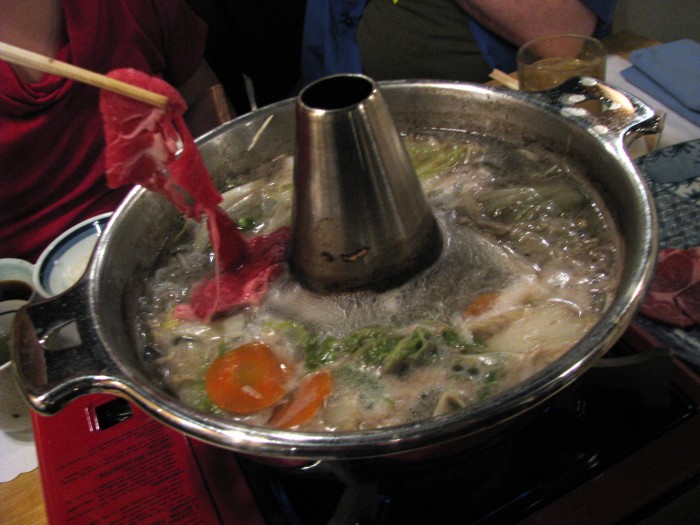 Shabu shabu is a fun meal to share with friends. A social meal like fondue or Korean BBQ, part meal part activity it allows everyone to adjust the food to their own tastes. I enjoyed all three meals and would return to all three. I think San Su has the edge in terms of the variety of vegetables, the additional banchan dishes and the ease of using the pan inset into the table, but the beef at Ba Sho was beautiful and I loved the goma sauce.

5 Comments to “Shabu Shabu in Columbus”