This week I had the pleasure of assisting at a North Market Chef Series cooking class. This week’s chef, Paul Yow has an amazing Columbus restaurant pedigree having worked at The Refectory and Rigsby’s and he is now the Executive Chef of Barcelona Restaurant and Bar in German Village. Paul set out to teach us six tapas dishes that we could replicate at home, and in the process also managed to teach us a lot about Spanish ingredients, some history and the Spanish approach to food. We started with dates stuffed with a creamy Spanish sheep and cows milk blue cheese with Marcona almonds

Paul was a good teacher, passionate and knowledgeable but very humble and personable and built our confidence that we could pull off the dishes at home. ‘Learn a recipe’, he said, and then ‘the next time you make it, wing it’. He emphasized the quality of ingredients as being paramount and then, often, doing as little to them as possible. 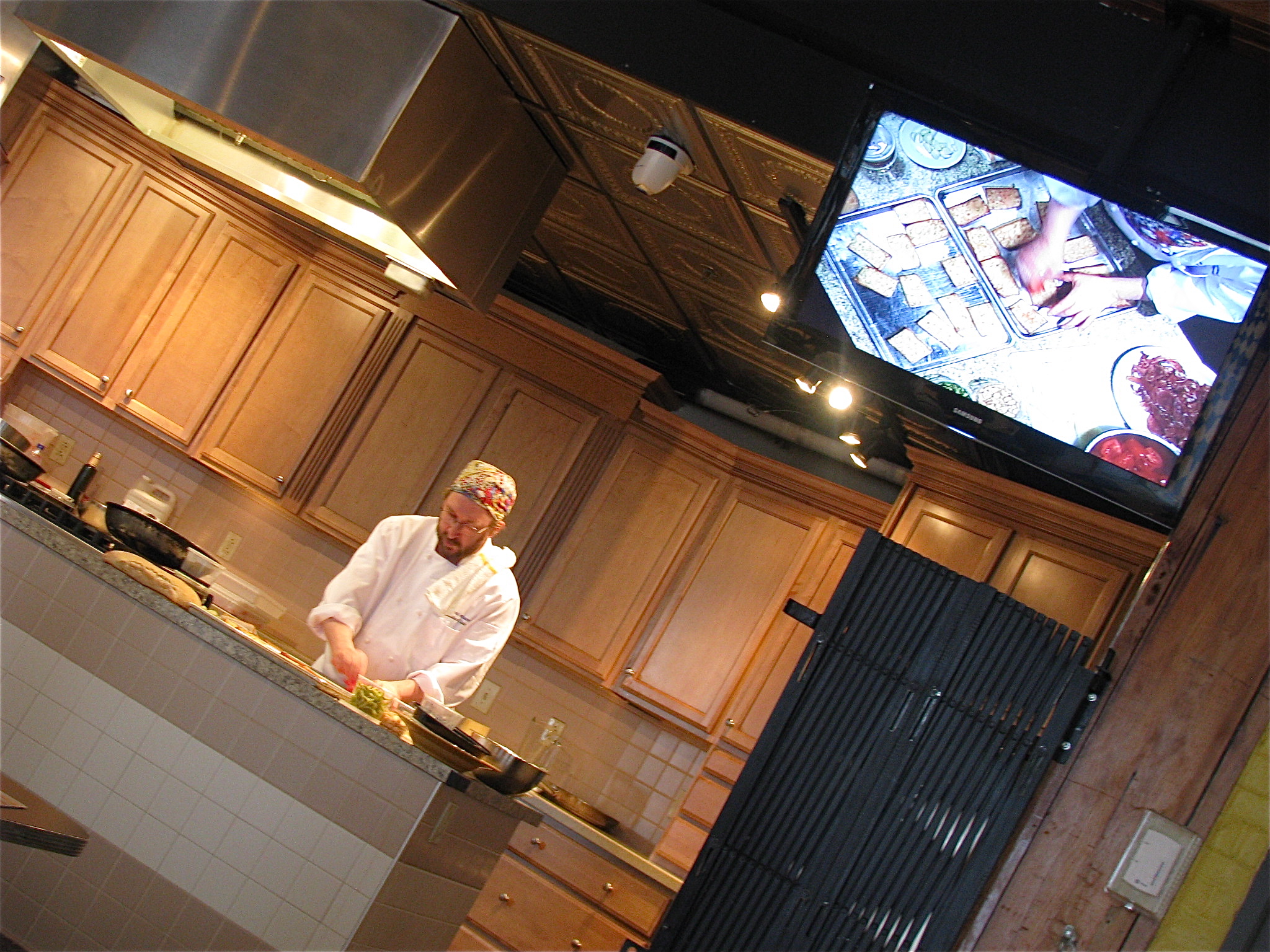 The dates were followed by tomato bread topped with 12 month old Manchego cheese and Iberico ham. The bread was lightly toasted, rubbed with split garlic cloves and then rubbed with the cut side of a tomato. Iberico ham is often available from Curds and Whey in the North Market. It is expensive, but worth it, and you get a lot of flavor from a very thin slice. Ham, cheese and bread doesn’t get much better than that. 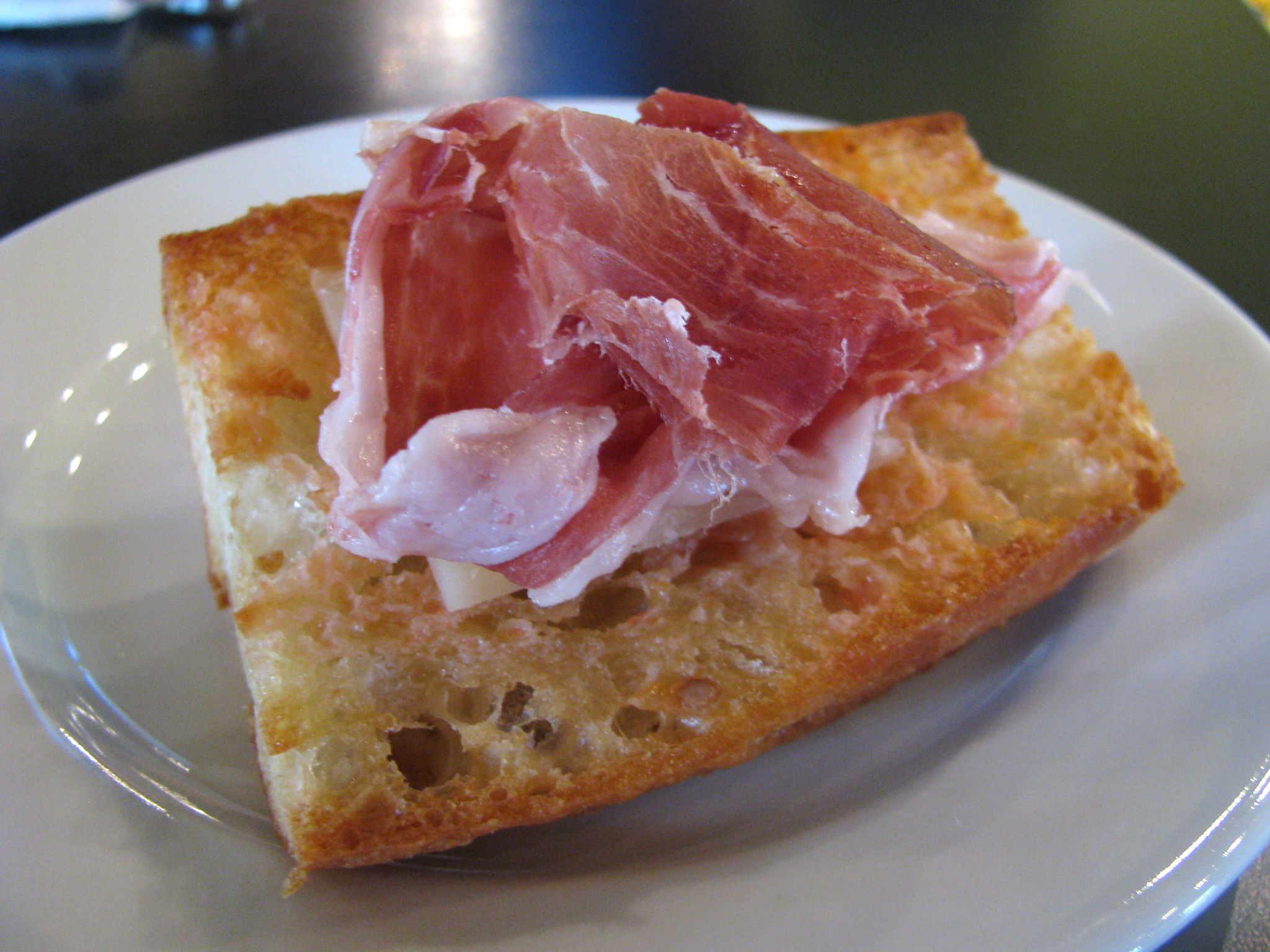 Paul taught us how to saute the shrimp, starting with a cold pan to avoid overcooking them. Listening for the sizzle to know when to adjust the heat. They tasted wonderful and I wished I had some more bread to mop up the garlicky oil. I hope no one saw me dipping my finger into the oil. The shrimp were accompanied by some pickled Basque piparras peppers, fairly mild and sweet, piquant peppers. 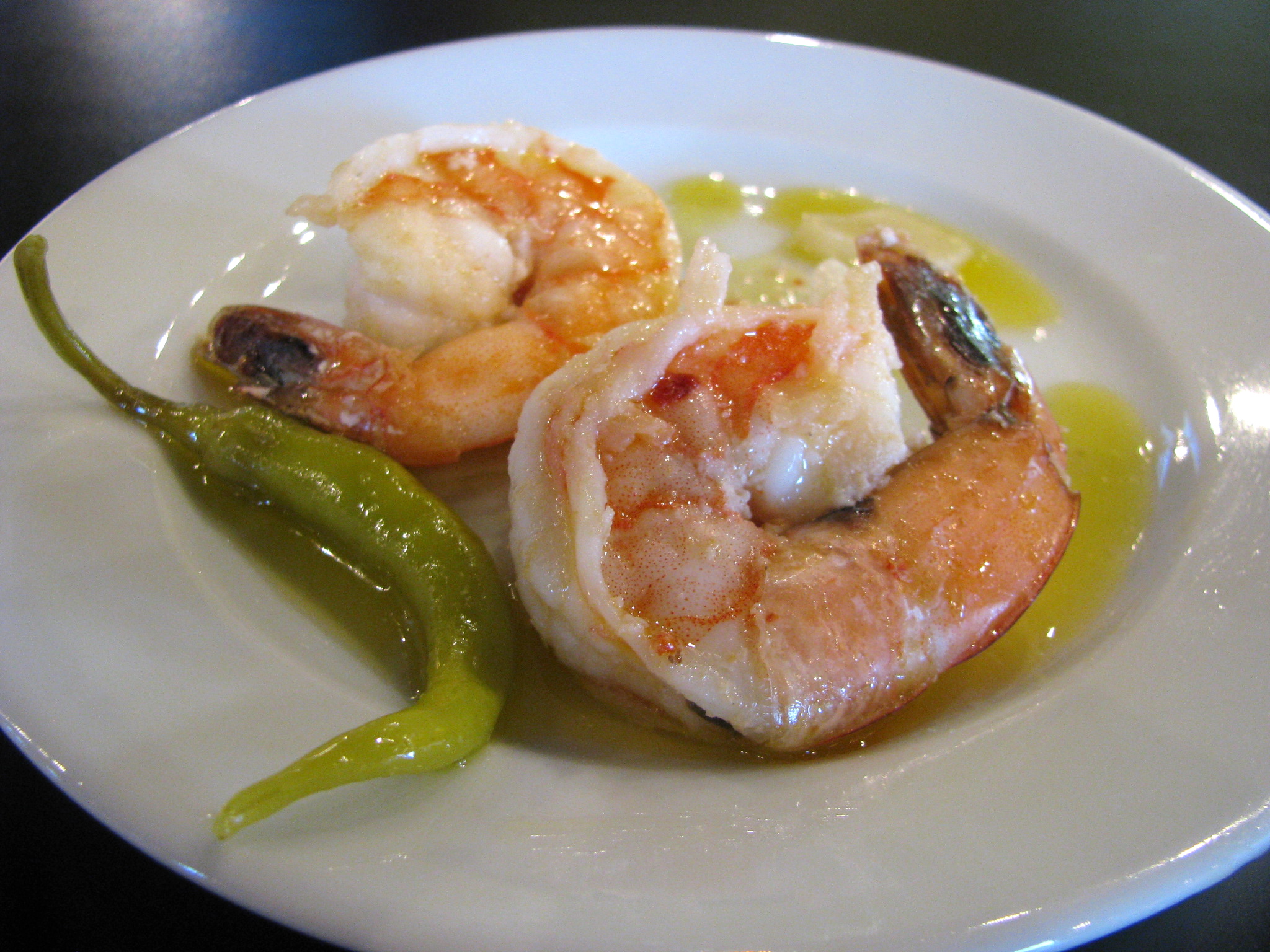 Paul’s gazpacho was made, due to the season, with canned tomatoes and was none the less for it. Certainly was one of the best I have tasted. A generous amount of good sherry vinegar and some tabasco gave it some tanginess, which I appreciated. Paul advised us to start making gazpacho ahead of time to let the ingredients marinate together. One of the secrets, apparently, is a generous dose of a very good olive oil. It was served with some frisee lettuce, and a white anchovy. 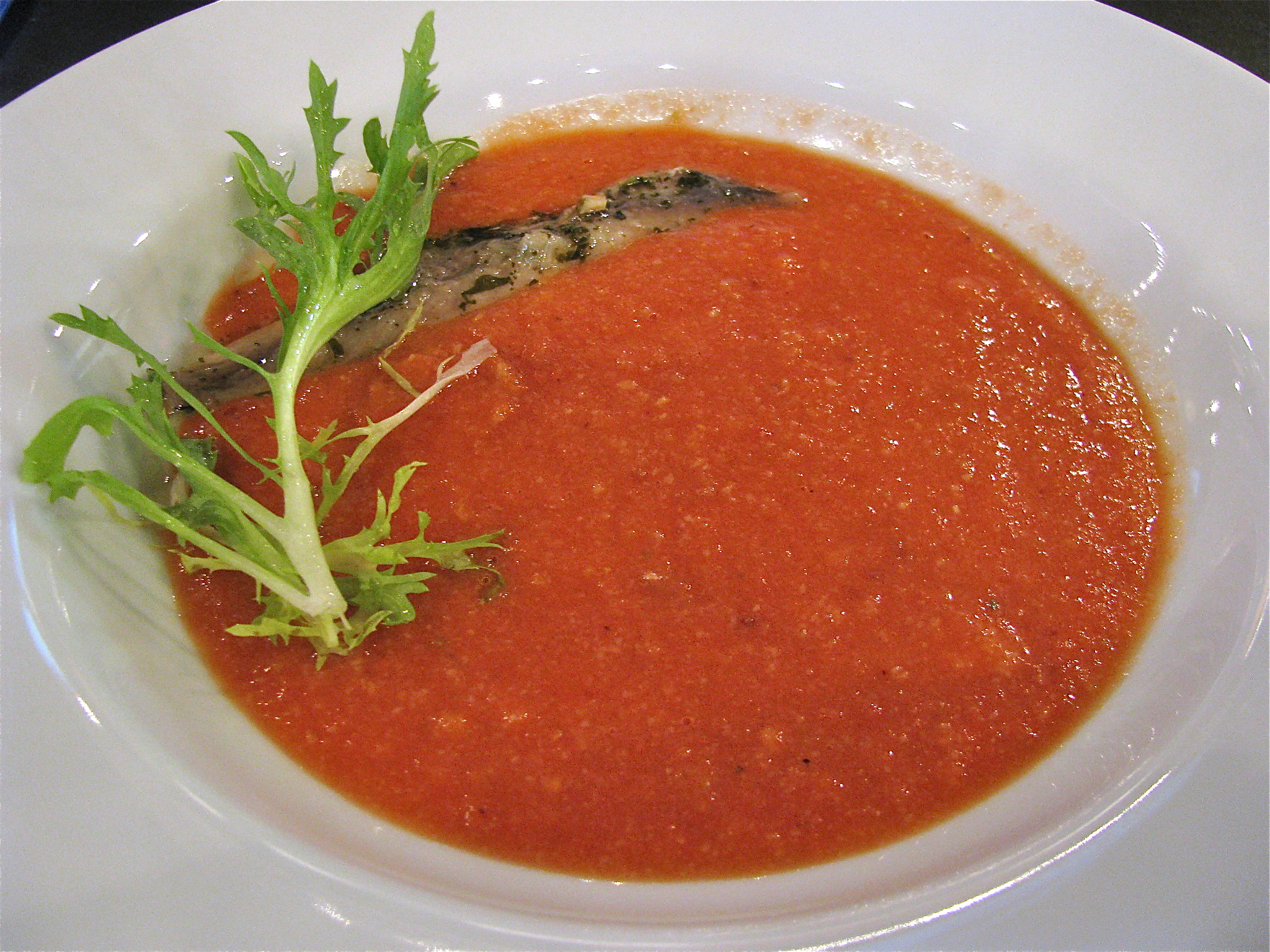 Paul shared lots of useful information – such as, to compare the flavor of different vinegars, (dip a sugar cube into the vinegar and then suck it out of the sugar cube. The sugar will neutralize the acid and allow you to taste more of the flavors in the vinegar);  to save leftover gazpacho to make into ice cubes for the ultimate Bloody Mary and where to find specialist Spanish ingredients.

The penultimate dish was what one participant described as salmon rangoon. A salmon fillet stuffed with cream cheese, crab meat and shallots and dipped in panko for some crunch. It was served with a cherry gastrique.

Put the vinegar, red wine and sugar into a pan and keep at a brisk simmer until the mixture has reduced by half. Stir in the cherries and simmer for a few more minutes until the cherries have started to soften and swell. This would be good served with all sort of dishes.

It was an enjoyable and informative class and I am now torn between wanting to try making my own gazpacho at home or sitting on the Barcelona patio with some sangria and letting Paul and his staff make it for me.

Paul has written a cookbook with recipes from Barcelona called ‘Reflections of Spain‘ and it is available at the restaurant.

← Ramp-ant
Middle West Spirits: a micro-distillery in the neighborhood →