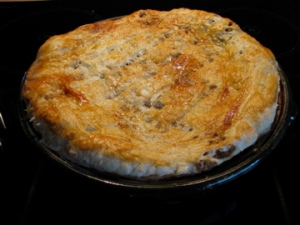 It seems inconceivable that the new year starts and we are still eating up left over turkey. Slightly depressing when everything is about new year’s resolutions, fresh starts and all that, but I guess it goes along with the irony that most people start the new year with a hang over. Eating leftovers however, do fit with the financial fears and frugality that seem to be the impending theme of 2009. In any case, this post should really be entitled, increasingly desperate and creative ways to try and disguise leftover turkey.

Turkey leftovers remind me of this funny Pizza Hut commercial from my childhood and in my memory turkey leftovers always went on for days and days. Dishes I remember are turkey tetrazzini (a pasta casserole), rissoles (croquettes) and a creation of my father’s disparagingly referred to only as turkey slop. One of my favorites was Boxing Day pie, which I remember having a mix of turkey and ham, a whitish sauce and a suet crust.

I couldn’t find the original recipe for Boxing Day pie and went surfing around looking for a good pie recipe. The one I decided on was a new Jamie Oliver recipe from Jamie Cooks Christmas on Channel 4. The recipe was Jamie’s turkey and sweet leek pie. We didn’t have enough leeks (2kg is a lot of leeks) so I improvised with a mixture of leeks, celery and onion and it seemed to work out fine. I love celery anyway. I also substituted yoghurt for crème fraîche. We used puff pastry from the refrigerated section of the supermarket and it was really easy. Jamie adds sage and chestnuts into the pastry and I did follow this, because we happened to have a jar of chestnuts, but I am not sure how much it added to the dish, so I probably wouldn’t bother again. 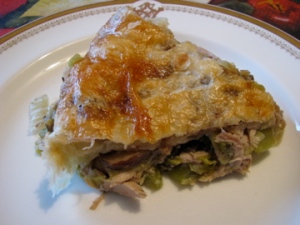 Overall it was very tasty, and I would recommend it as a way of using up turkey. One of the comments on the C4 website says that Jamie deserves a knighthood for this pie alone! I’m not sure about that, but I do think the school dinners campaign and the ministry of food are great initiatives.

Another turkey leftover dish this week was turkey curry. It may have lacked Indian authenticity but it was delicious and colorful and definitely a good flavor contrast to the food of the last week. Easy to make: we used an onion, some fresh garlic and ginger, curry paste, a tin of tomatoes, and some vegetables for texture. It was garnished with toasted flaked almonds and fresh cilantro. 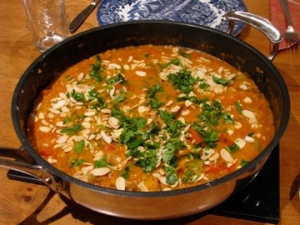 Last night’s effort was less successful – a coq au vin-esque turkey slop that I added too much leftover gravy too and it never quite recovered, despite several applications of wine and brandy. I think that was the penultimate turkey meal….. one more round. Any suggestions?