The pot luck on sunday may have fallen short of the Guinness world record but there was a staggering amount of food. The final total was just under 400 dishes and it shows what a feat it would be to actually break the record (Currently 601). It is definitely do-able with a wider base of support and good publicity. I am sure that it must have broken some sort of state or city record at least.

It was interesting to see what people brought and there was a wide range of dishes from the wonderful locavore wheat berry and apple salad made by Anne D as part of her eating locally challenge to all sorts of creations involving mini-marshmallow and food coloring. Quite a few different pies, a multitude of brownies, several variations on mac and cheese and cheesy potatoes and the quintessential green bean casserole. There was way more than it was possible to take in, let alone eat. I was happy to see that some of the local independent businesses supported the event including Surly girl, Betty’s and patty cake bakery. The patty cake toll house cookies were definitely one of my favorite things. 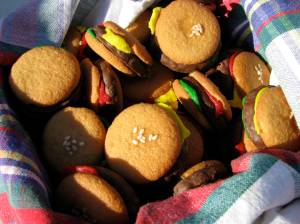 There was a lot of guess work trying to figure out what some of the things were and I definitely heard ‘it’s good but I don’t know what it was’ a couple of times. This chicken pie made me think of the movie chicken run or a far side cartoon. I had some excellent pork and baked beans and I have to admit I ate a couple of the hedgehog potatoes that I made.

Pretzels with a kiss and and M&M

32 bean soup…. now that’s a lot of beans! Apparently it was made by mixing together a couple of different 9 (or more) bean soup mixes and none of them had duplicates. 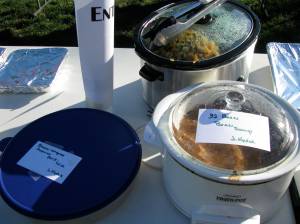 As well as credit and thanks to all those who made such delicious food, commendation also has to go to those that made a valiant attempt to try as many of the 400 dishes as possible.

← Super sandwich
Lunches at my desk →