I loved Montréal. I could wax lyrical for pages. I spent much of my car journey back to Ohio creating convoluted plans of how I could live there. It really has everything I aspire for in a city – pedestrian and bike friendly, a preponderance of independent shops and restaurants. Quirky neighborhoods, foreignness, European influences, rowing, winter sports, parks, views and open spaces, history, public transport, a wide ethnic mix and amazing food. There was a lot that seemed familiar and resonated of Toronto or other cities I have visited (Sydney, Amsterdam, Paris). The people were friendly and the weather while I was there perfect for wandering around.

I have some friends from Montréal and all of the advice I had about what to do there centered on food. The itinerary became overwhelmingly gastronomic. I had a list of places to eat that would have had me rolling back across the border. Luckily I walked A LOT while I was there, so I was able to check quite a few of them off the list.

The list included the famous Schwartz’s Deli purveyors of smoked meat sandwiches, where I dutifully stood in line, perched at the bar and learned that nash is a type of karnatzel (an up market pepperami like sausage).

One of my favorite food places (and I was lucky enough to go there twice) was Bilboquet an artisianal glacier on Rue Bernard in Outremont. My first visit I tried some of the sorbets (that they are famous for: apricot and Lulo (naranjilla) and my second visit maple syrup and one of the coffee flavors (I can’t remember the name). Their genéréux portions certainly live up to the name. I have never seen an ice cream place with such a long line on an ordinary evening. It is in a largely residential neighborhood and obviously has an extremely loyal following.

The next day, on my friend Cat’s recommendation I headed to the Jean Talon Market. I was enraptured. It was a spectacular market. A feast to the eyes. I spent the whole morning perusing the stalls and taking photos.

I was both disappointed and relieved that I couldn’t go on a shopping spree as I wouldn’t have know what to choose. There was a stall with 6 kinds of carrots…..

………another with 5 types of mangoes.

There were stalls selling only garlic, herbs, mushrooms and artichokes.

There was an amazing array of berries (particularly blueberries), peppers, beans and tomatoes.

It was interesting to see what was in season there compared to Ohio and there was a huge amount of pride in Quebec produce.

Around the market are a lot of food shops, a wonderful bakery and a cook book shop (I resisted temptation). I had a picnic lunch sitting on a picnic table listening to a live band and some of the stall holders singing along to ‘that’s amore’.

A couple of other food stops were Olive et gourmando (another of Cat’s recommendations) where I had a delicious rhubarb and ginger muffin, Beauty’s for iced coffee and Café Souvenir for avocado melt (as recommended by Ben). All places I would be more than tempted to revisit. I would also like to try some of the many Vietnamese restaurants and there were some sushi places that looked good. Needless to say, I can’t wait to visit Montréal again. 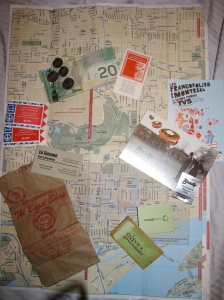