I went to the market later than usual this week – now that season has started I have to work on saturday mornings. This week I bought tomatoes (yellow amana and aunt ruby’s german green heirloom tomatoes), swiss chard (because I couldn’t resist Sandy Sterrett’s description of all the ways you can cook it); long beans, haricot vert, Kolhrabi, corn, raspberries, baby patty pan squash and flat parsley (that Margaret informed me was picked by starlight).  There weren’t any more reliance grapes so I branched out and bought some mars and vanessa grapes.

I was sad that I missed the paw paw festival last weekend. I didn’t hear about it until after the event. I had no idea that paw paws grew in Ohio. Apart from the song ‘the bare necessities’ from the Jungle book, I don’t think I have given paw paws much thought. I love custard apples and they are the same family. Anyway I was very excited to find that Quiver full farm had some and I bought everything they had left. They will take a week or two to ripen so I have some time to decide what to do with them. They might have more next week if the squirrels and raccoons don’t get them.

Another thing about Ohio I learned this week is that you can get local shrimp. Another festival I missed – maybe next year (so much good food, so little time). They only harvest them once a year.

I learned more about the Greener Grocer this week and their parent organization Local Matters. At the moment I mainly just go there for  Snowville dairy milk and whatever I need but can’t find in the farmers market outside. I bought more from them over the winter when the farmers market isn’t open.

I did do a little bit of cooking this week – even with all that eating out! Not as much as usual though. I also had to eat up some things from the fridge and freezer. The Heidi Swanson zucchini bread defrosted really well. You wouldn’t have known that it had been frozen. 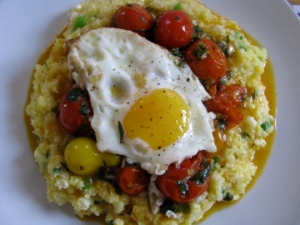 Second attempt at Peter Berley’s polenta and caramelized tomato recipe. First attempt and recipe is in a previous post. It might have been even better this time and I added the scallions. I am getting better at fried eggs.

Lots of herb drying this week because I couldn’t keep them in the fridge anymore. I tried two of Helen Witty’s methods. One where you dry the herbs at a low heat in the oven for several hours with the door partially open and the other where you blitz them in the microwave for a couple of minutes. Comparing the two finished products the oven version is a lot more fragrant and smells fresher so that is the winner on taste even though it is time consuming and not very eco-friendly.

Being a tomato novice, this is the first time I have made a BLT. I was pretty proud of the result, but it is mainly due to the fantastic ingredients: a little scrap roll from the Omega bakery, the last of my Thurn’s pepper bacon, a yellow amana straight from the farmers market and mesclun from the garden.

I had it with some tomato salad, more mesclun and an ear of Rhoads corn. This is probably the last weekend of fresh corn. sad. 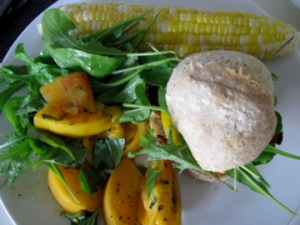