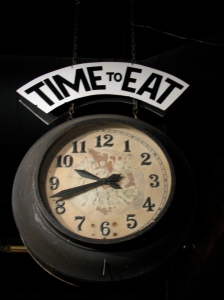 I have just had one of the best meals I have had in Columbus, and probably the best meal since my birthday treat at the Watermark in Sydney.

I went to a monthly dinner hosted by Lisa (the waitress) who writes the blog restaurant widow. It was held at the North Market which is, luckily for me, in walking distance. Not only were the food and wine fantastic but the atmosphere was very convivial and the food was obviously chosen and prepared with a great deal of thought, passion and care. It was a cross between eating at a restaurant and eating at a friends house.

The meal featured a wealth of local produce and some wonderful wines chosen and introduced by Lisa’s sommelier husband. I think that all of the fruits and vegetables, meats and cheeses came from local farmers. We started off with a wonderful sangria made with rosé, vodka, berries, watermelon and lemon scented grappa (eau de vie). Very refreshing with quite a kick. Next were some hors d’œuvres: yellow and red baby bell peppers stuffed with either mozzarella or very tasty lamb chorizo, and tiny puff pastry squares with goats cheese and halved cherry tomatoes that were so sweet that they almost tasted of ketchup.

The first course was gretna grilling cheese from Blue Jacket dairy (they also made the goat’s cheese and mozzarella), which is a halloumi style cheese and it was served with watermelon and some balsamic vinegar. It went perfectly with a sparkling rosé which added acidity to complement the dish. This was followed by an heirloom tomato salad with several colorful varieties of tomato including green zebras (which look so cool), and those of you who know me well will be shocked to know that not only did I eat the tomatoes, but I really really enjoyed them and had seconds!

The main course was chicken served with roasted potatoes (again a colorful and varied assortment), green beans and an irresistable corn dish with onion and bacon. I was lucky enough to be seated opposite Brent and Kathy Rhoads, owners of Rhoads farm market and the longest standing stall holders at the north market farmers market. They had provided a lot of the vegetables for the dinner including the beans, corn, peppers and the watermelon and it was fascinating to hear their perspective on the market and farming in Ohio. Our other dining companions were enthusiastic amateur chefs and food lovers who shared a passion for local produce, cooking and good food.

Dessert was a peach crisp with ‘red-hot’ sauce and cream and a wonderful fragrance of cinnamon. A perfect ending. I should have mentioned the other wines, which were both rosés, but I can’t remember the names. The one that accompanied the chicken was from Sicily and was a fantastic wine (so I will have to add that later). 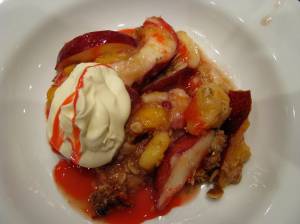 To top off a fabulous evening we got a goodie bag to take home and a shot of the grappa (surprisingly mellow) to send us on our way, and so on a food (and drink) high I floated home across the park, already looking forward to next month.

Lisa -if you read this – thank you and I hope that the photos do justice to the food.