It went from being in the seventies last week, to getting down into the 20s tonight. Brrr. It is a wierd mix of autumn and winter at the moment depending on the day, or even the time of day, but the weather seems to have heralded winter foods and lots of tea drinking.

I didn’t get to the farmers market until lunchtime and several of the stallholders were packing up, so I am not sure what other stalls or goodies I missed. I know I missed out on the Toad Hill Broccoli but hope to get some next week. The only advantage of being so late was that I did get a couple of nice bargains and I still found some delicious vegetables. It definitely wasn’t crowded either! I bought some pretty mixed lettuce greens from Toad Hill which included some speckled trout lettuce and mizuna. I also got shunkyo radishes, fingerling potatoes and more red carrots from Wayward Seeds plus some Stayman Winesap apples and apple cider from the Thomas’. I highly recommend the sliced sun-dried tomatoes from Toad Hill, I can’t resist snacking on them.

Having not bought any squash for a couple of weeks I made up for it on saturday. I bought four beautiful different squashes: spaghetti (from Toad Hill) and Carnival sweet dumpling, seminole and red kabocha from Wayward Seeds.In the photo the seminole and the spaghetti looks similar  but the seminole is more tan in daylight. I resisted the Lady Godiva which apparently has seeds that you can almost eat raw.

My favorite thing to do with squashes at the moment is to roast them whole and then either eat them straight away or save them and reheat the flesh. You can just throw them in the oven when you are cooking something else and use them another time. I think I might make some soup with one of the squashes later this week, maybe Nigel Slater’s curried pumpkin soup. 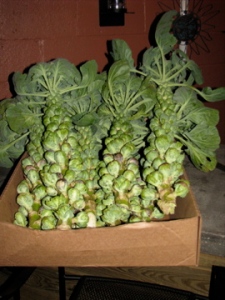 The brussels sprouts on the stalk are from Dick Jensen at the Flying J Farm. Here you can see the space-age looking bouquets. Enamored as I am with plain steamed brussels, I decided to continue my sprout experimentation; it is interesting to see what else you can do with them. This time I was inspired by a recipe from Saveur Magazine’s November issue. I haven’t read this magazine before, but someone gave me a copy and I enjoyed leafing through. They also had a cranberry sauce recipe that sounded good.

The Brussels sprout salad was very simple, absolutely delicious and would be perfect with thanksgiving or christmas leftovers. It is fresh, tangy, crunchy and a far cry from the over-cooked and soggy sprouts that have turned so many people off.  I fed it to someone who claims not to eat Brussels sprouts and it was a success. However, although it is simple, it is fairly time consuming to make because you have to slice the brussels. I used a mandolin (and survived finger tips unscathed) and it took a while (which I didn’t mind as I was listening to the Splendid Table special edition from Columbus). I don’t know if it would work to use a food processor. The other ingredients are toasted walnuts, pecorino cheese, lemon juice and olive oil.

I also bought some food from inside the market: raisin cinnamon bread from Omega, to go with my pumpkin spice cream cheese from Blue Jacket Dairy; bacon and more autumn sausage from Blues Creek (I am hooked) and some vegetables from the Greener Grocer. My main purchase was a rabbit from North Market poultry and game to make a rabbit stew with. I love rabbit stew, tasty, economical and it always makes me nostalgic for my first year in university; going to Grainger market in Newcastle, cooking with Helen, and dealing with all the reactions when the vegetarians realized what we were having for dinner. 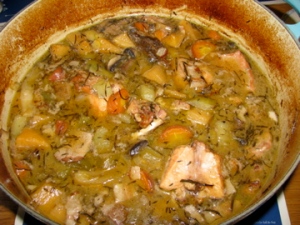 I did consult Simon Hopkinson’s book, ‘Second helpings of roast chicken’, on how to chop up the rabbit and borrowed a couple of his ideas (cooking the off cuts in the chicken stock to give it more flavor before I added it), but I mostly resurrected the basic recipe from memory and much made it up as I went along.

Ingredients:
1 3lb rabbit
a couple of handfuls of flour, seasoned
2-3 tablespoons safflower oil (or similar)
2 tablespoons of brandy.
4 celery stalks, chopped
3 cloves garlic, chopped
1 leek, sliced
dried rosemary and thyme (maybe a tbsp of each)
2 bayleaves
1 small rutabaga (swede) cubed
2 carrots, sliced
1 package of chestnut mushrooms, sliced
1 litre of chicken stock (didn’t really need this much, but it was what I had in the freezer)
half a bottle of dry white wine
salt and pepper

Chop up the rabbit. I didn’t do a particularly skilled job, so I won’t try to tell anyone else how to do it. I am sure there are instructions online. Cook the rabbit off cuts in the stock and white wine, to add flavor, for 30-40 minutes and then strain and discard the off cuts.

Coat the rabbit pieces in seasoned flour and then brown, all surfaces if possible, until golden brown. I also browned some garlic (another Hopkinson tip). Deglaze the pan (I used a couple of tablespoons of brandy).

Add some more oil and sauté the vegetables (except the mushrooms) for a few minutes and then add the rabbit, seasonings, mushrooms and liquid. Put the covered pot into the oven for 2+ hours at 300ºF. I uncovered it after an hour and a half to reduce the liquid. It made the house smell amazing and the meat was really tender.

It Fed 6 (but depends on how much meat you want) and would be great with mashed potatoes. I served it with fingerling potatoes which were delicious, but quite waxy so they didn’t soak up enough of the sauce, which was fairly soupy. You could definitely vary the ingredients – I am sure parsnips would work well and fresh thyme would have been good if I had had any.