The arrival of Bono TOGO has been one of things that made staying in Columbus this summer fun and I have been almost weekly since I discovered this new neighbourhood gem.

Bono is on West Russell, a small one-way street off High street, in the Short North and is run by husband and wife Bill and Peggy Yerkes, both real characters with Peggy laid back and chatty as anything and Bill gruff and wry. It is run in the premises of the Eleni Christina bakery in the afternoon and evening. It is mainly take-out, as the name suggests, but there is a little space inside where people can perch and three small tables on the side walk. So far, I have always eaten there and I seem to have been lucky because Bono has developed quite a cult following on the Columbus Underground. Sitting under the street lamps on a hot summer evening it is a cosy and informal setting and you are surrounded brick buildings and trees. Being on a side street there is little traffic and you are close to high street but not right in the fray. Peggy comes out and chats and turns a blind eye if there is a bottle of wine lurking under the table. More than that, she will find you a hodge podge collection of thrift store glasses. Sometimes the tables are decorated with other seemingly random kitsch – an eiffel tower perfume bottle or a broken magic eight ball.

Bill and Peggy previously had a pizza place (of the same name) in Delaware and the current venture is a foray into downtown Columbus. If it does well, they plan to look for more permanent premises. Hopefully soon, because eating on the sidewalk won’t be so pleasurable in November. The Eleni Christina bakery was chosen because apart from the hours working well to time-share, it was the only place they could find with a hot enough oven. The heat of the oven is one of the things that makes their pizza bases so superb.

The pizzas are made with fresh ingredients (they shop every day) and the smell of fresh bread and basil while you wait is tantalizing. The pizzas are $8 each or 3 for $20 and you should know they only take cash.

I have been steadily working my way through the menu, ordering a different ones every time and with the help of friends I have tried 12 of the 19 pizzas on the menu. There are some interesting combinations – the Jamie style ham and pineapple with cinnamon, almonds and coconut; The Berliner with sauerkraut and kielbasa, and the amusingly named Hulk and Barry white, one being all green and the other all white. My friend Tim proved his manhood by eating a whole cherry bomb with ‘a whole boatload of really f*#king hot peppers’.

The pizzas vary a bit day to day, so what is sensational on one visit, may not quite live up to expectations on a second tasting (it could be my memory). That said, my favorites so far are the bianca, the napoli and the five cheese. I find the tomato sauce a little too sweet, so usually prefer the white or pesto pizza, although the napoli has enough kick from the anchovies to compensate. I think my next step is going to be to create my own…. I have already started thinking about the perfect pizza. So far I am thinking – pesto, roasted peppers, sundried tomatoes, parmesan and gorgonzola and something else…… Peggy says sausage goes really well with the pesto.

Tonight (pictured) I had a capricossa ‘Colleen (of slow food fame) style’ which according to Peggy was tomato sauce, with pesto on top and a fried egg as well as mozzarella, artichokes, mushrooms, sundried tomatoes and olives. It seemed that Bill had different ideas and as you can see there was not tomato sauce, which was fine by me. It was delicious and the fried egg was just soft enough without being runny.

I didn’t notice this evening what they are doing now in the way of desserts. The menu gets updated pretty often, it seems. On the version linked above they have creme puffs but when they first opened they had delicious crepes with nutella or maple syrup and nuts. On my first visit there, my dining companion had brought me a tupperware t of raspberries from his garden and Peggy insisted that we should have some of them for dessert. She disappeared inside and came back with an amazing crepe creation with berries, nutella and cream. Forget the pizza and the ambience – I was sold.

The photo of me in the about section was actually taken after an evening at Bono. A friend of Bill’s gave him a mess of garlic and I don’t think he want to be bothered peeling the tiny cloves. He asked if anyone wanted some wild garlic. I eagerly said yes, thinking I would get a few bulbs and not the whole tangle. My friends commented that women more commonly leave restaurants with a plastic wrapped rose, than an unruly bunch of wild garlic.

You can read other reviews on The Walker Evans effect and Columbus foodie where you can see a photo of the mouthwatering bianca. You can also listen to a foodcast about Bono TOGO 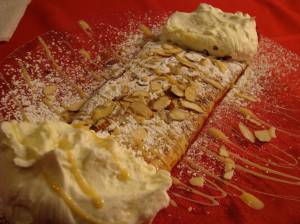 ← Patty pan squash
Four day weekend – Out and about in Columbus →